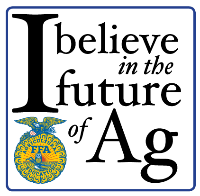 Several years ago the Nebraska FFA Foundation I Believe in the Future of Ag campaign began to serve as an outlet for local FFA chapters to receive donations for innovative projects in their classrooms, leadership programming, community service projects and field trips to advance agriculture education in their schools.

I Believe in the Future of Ag started in the Northeast part of the state with a couple of corporate partners that wanted a way to support local chapters in their territory and state programming. The program turned into so much more with the addition of an educational advertising campaign and statewide presence in fall of 2011.